For my birthday this year we decided to go down to the best amusement park we’ve ever been to because they opened a new section dedicated to the world of Harry Potter.  We both like roller coasters and Harry Potter so how could we lose?

For those that do not like to read, the short review is this:  If you get the chance to visit and you like Harry Potter, do it!  It is great!  Small but mighty.  Worth your money and time.

For the readers out there or those that like to look at pictures, here we go.

We’ve been to Islands of Adventure several times in the past.  It is basically a Disney World for teens to adults.  They took what made Disney good and improved on its weak points.  Instead of an endless parking lot with a shuttle to the park there is a more compact parking garage across the street.  Not only is it quicker to get to your car, but it is in the shade and you can travel back and forth as needed (if needed).  There are not long walks between rides.  Everything is packed in.  Every ride is a roller coaster or equivalent thrill ride.  They create great environments for the rides (more than half the fun for me).  So when you go to the Doctor Suess area, it looks like his books – complete with pairs of curved living palm trees.  The super hero area could have been lifted from the pages of a comic book.  It is very very cool.  Just outside the park is an area for fine dining.  Instead of steamed mystery meat you can visit Wolfgang Puck’s restaurant.

Given the choice, mid-October is about ideal for visiting the park: kids are back in school, things have not ramped up for all the Halloween stuff they do there, holiday plans don’t have to be altered and the weather is just about perfect.  We went mid-week to further decrease the mobs of people, but apparently the non-US world does the same analysis that we did and came to the same conclusion.  The park was still pretty much packed until late afternoon.  The difference was fewer Americans and more Europeans and Asians which made it a little cooler (and more realistic).  There were many British and French accents floating about.

For this trip we just drove down, did the park and drove home in a day.  This shaved off a few hours we could spend in the park so we chose to limit ourselves to full emersion in the Harry Potter section.  If we had time, we’d sneak in a ride or two on the Hulk and Spider-Man before we left (We managed to ride The Hulk but not Spidey).

Parking and getting to the park were simple and easy for the reasons given above.  Getting our tickets was another story.  I had purchased our tickets online so naturally we ignored the already lengthening general sales line and went to the nearly empty kiosks for advance purchase.  You know me, I had brought all of our pre-pay ticket paperwork.  We tried every code on those sheets and nothing worked.  Poop.  Looked like we would have to stand in the long line anyway.  Melanie wandered off to find a bathroom when I noticed a park attendant answering questions for people in line.  When she saw me, we exchanged the secret Florida eye glance so when I asked where to go for pre-paid tickets she asked, “Are you a Florida resident?”  My affirmative answer got me a half-whispered “You may go to group sales for your tickets.  It’s right behind that large rock.”  Group sales had zero people in line and within about a minute of showing them my FL license we were in the park.  Score one for the home team!

We knew exactly where to go because the Harry Potter section had been created inside the old fantasy section of the park.  Being a land-locked park, IofA had little choice and I thought it was pretty smart.  Since the two ideas were very similar, they could see what worked previously and improve upon it for the repurposing.

Even though we didn’t get in until about 30 minutes after they opened, the park was pretty empty until we crossed over to the fantasy section.  The crowds became apparent as soon as we crossed the bridge to that island.  I had done a little bit of reading prior to the trip but I still wasn’t ready for what I saw.  It was similar to the feeling I got when I saw Fellowship of the Ring for the first time.  It was like I was seeing what my mind’s eye already knew to be true from the books.

The comparison is not completely fair though.  FotR was a near pitch-perfect translation.  This was more of an excellent translation given the constraints of the space.  One example of this is the Hogwarts Express that greets you as you enter the park.  You would think that they would have the train platform and all of that jazz available but it is just the locomotive “exiting” the station at the end of the line.  Very cool but much less than it could be.

Next you come into Diagon Alley and this is an eye-grabbingly amazing place.  Everything is so cool looking and detailed.  This is as close as a real world place comes to representing a fantasy locale you’ve read about.  We spent much of our day wandering around here, looking at the window displays and going in the shops.  If this was the only thing we had gotten to do, it would have been completely worth the money to me.  I badly wished that they had ripped out more of the existing park to give this section more space.  There were so many shops that were just store fronts with no store to enter and the shops that you could go in were very small.  This really isn’t a complaint.  It’s more of a plea to expand on the great things already in place.  I’ll stop writing now and let the pictures and captions tell the story for a while. 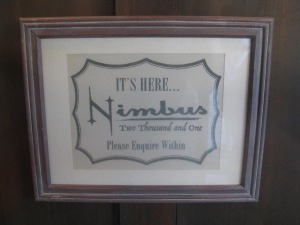 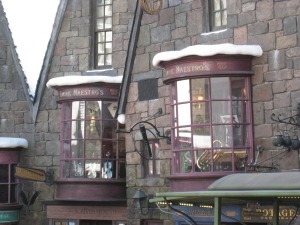 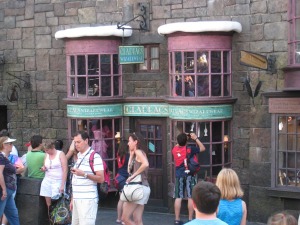 Eventually you get to the back of Diagon Alley and then it’s off to Hogwarts.  The castle is amazing looking and walking around inside while waiting for the ride is the best part.  Here are a few pix to give you a taste. 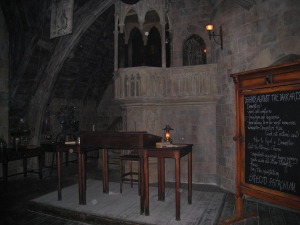 The ride itself is a brilliant piece of technology and it is clear that it is designed to get people on it, through it and off it as quickly as possible.  It was so frustrating to me that the ride couldn’t continue the tour of Hogwarts and the surrounding world but instead was a chase scene.  If you’ve ever wondered what it would be like to be stuffed in a gunny sack with a kindergarten class and rabid cats then tossed into a dryer, this ride will clarify things for you.  It had amazing visuals but was so action oriented that it was silly even to the point of stupidity.  I think it was a waste of Universal’s money.  You move so fast and scenes change so quickly that you cannot keep up with what your eyes are taking in.  You can’t even fully understand what the characters around you are saying.  Harry’s upset.  Womping Willow.  DEMENTOR.  Safe at last.  Get off the ride.  Move along.  The effect is very literally like watching a movie in fast forward.  There really isn’t a point other than it is there and you should experience it once.

On a side note, a friend of ours had trouble with motion sickness on this ride so be aware.  You do move around a lot, but it didn’t bother either Melanie or me.  Still, his advice is priceless:  Do not eat lunch or drink a butterbeer before riding.

Speaking of butterbeer, we had to make sure to try one of those and a pumpkin juice.  Both are tasty and what you’d expect (although it is hard to nail down a specific taste from the books’ description) but, man, they are rich and sweet.  Treat either as a dessert.  We were too sugared up to try a frozen butterbeer but I’m sure they were delicious too.

If you’d like to make your own butterbeer, clicky here.

After Hogwarts, we decided to pay Hagrid and Buckbeak a visit.  Even though this roller coaster is a kiddie ride it is still neat.  The approach to the ride was again my favorite part with Hagrid’s house being one of my favorite things we saw.

Next up was my very favorite roller coaster in the park.  It is, in fact, the best ride in the park.  I don’t remember what they call it now but it used to be the Dueling Dragons.  Sadly, this must have been a penny pinching part of the plan.  All of the cool stuff you got to see before choosing your dragon is now gone.  I expected that but they didn’t replace it with anything.  You basically just walk through a long cave to the dragon staging area.

If you are unfamiliar with the premise, it is two roller coasters that are intertwined with one another representing two dragons fighting in flight.  At the end of the main waiting line you choose red or blue dragon and get in a line for one of those coasters.  If you are only riding once, the blue is slightly better because you go straight at a stone wall at one point.  I highly recommend riding both sides though and because this is an older ride, the wait is not very long at all.

After we were done with all the Harry Potter rides we had lunch at the Three Broomsticks.  Everything we ate was surprisingly good.

From the sights to the food to rides, this is the finest overall amusement park experience I’ve ever had.  It helps tremendously to be a Harry Potter fan and to have read the books but I highly recommend it to everyone.

3 thoughts on “Universal Islands of Adventure: The Wizarding World of Harry Potter”