As detailed in my how to make a Green Lantern costume post, we have been asked to dress as superheroes this year – specifically Green Lantern and Catwoman.  While doing an image search for Catwoman, I started running across articles discussing how adult superhero comic books are becoming and that she is at the forefront of this shift.  I won’t post any links as those images are NSFW.  Needless to say, Melanie will be Batwoman for Halloween this year.

We decided to make a sort of mash-up of Batwoman and Batgirl.  Between the two, there have been many different costumes from the comic books, TV show and movies.  The version we settled on has an active high contrast black and yellow color pallet and rugged details reminiscent of Frank Miller’s Batman.  I really liked the interpretation shown here (except for the skewed belt and leggy wrap thing).

MASK – Sew a Spandex Head Sock and Cut Out Eye Holes
My only concern with this costume was the mask.  I’m not a great seamstress and a mask could be challenging.  I knew making it out of spandex would be a big help.  Since it is so stretchy, it would be forgiving of a less-than-perfect shape.  I didn’t realize just how easy it would be until I saw this video.  Once I realized I could get away with a tube that would stretch to fit, I knew it wouldn’t be a problem.

First we took an edge of the spandex and wrapped it snugly around Melanie’s head to see how big of a tube we needed.  Next I pinned it up, cut it out and sewed it together up one side to create the tube.

Second we added a curved cut and sewed the top to create the ears.

After that we turned the mask right side out to hide the sewn edges.  Melanie tried the mask on and we marked for eye holes and a small nose ridge.  We tried to keep the holes small at first as we knew the material would stretch when she wore it.  We left all the cut edges raw since this fabric doesn’t unravel easily and it will probably only be worn one time.  After a test fit I noticed that the ears stood up but were a little flabby.  I made a couple of inserts out of some sheet foam (this stuff is awesome and cheap).  I guessed on the first set and then recut some a little bit larger to get them into a nicer shape.

CHEST INSIGNIA – Cut from Sheet Foam and Sew to Shirt
I have to imagine that one of the best parts of getting to draw Batman is putting your own spin on his logo.  There have been a huge number of different logos over the years but the one we settled on is from one (or more?) of the recent movies.  Its linear and angular nature lend well to the tougher harder look we were going for.

We sized the image for Melanie’s shirt and cut it out of the yellow Foamies sheet foam.  It is attached to her shirt with two stiches of yellow thread that can easily be removed without damaging the shirt (We were rushing to get pictures taken before the sun set so it is shown taped on below). 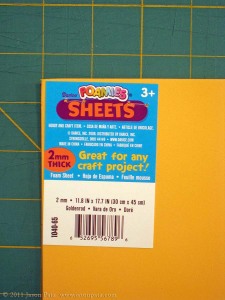 BELT – Cut from Sheet Foam, Glue Parts Together and add Velcro Closure
The belt was made from the same Foamies sheet foam that the hood inserts are made of.  First I cut two strips that would form the belt.  Next I made a buckle out of  a 3”x5” piece that would hide the seam where the two belt parts touched one another.  On top of that I glued a bat emblem and to its sides I glued “utility canisters.”

Once the glue dried, we sewed and glued two strips of Velcro on the ends of the belt so it can be attached from behind.

All parts were glued together with a super strong PVA glue that I’ve used since school called Sobo.  It is basically a thicker, stickier version of Elmer’s glue.  I would think any kind of flexible strong glue would work for this project.  I would not use Elmer’s though.

GAUNTLETS – Cut Fins from Sheet Foam and Sew to Tube of Spandex
Next we cut out yellow fins from the sheet foam adding an extra ½” to the bottom where they could be sewn into the spandex.  We also cut out rectangles of the spandex that could wrap Melanie’s arms over her shirt comfortably.

Next the fabric was folded in half and the fin was placed inside along the edge.  Then the edge that the fins touched was stitched, joining the fins to the fabric.

The fabric was turned inside out to create the finished gauntlet.  The ends of the fabric tube were left unfinished.

BOOT INSERTS – Cut Inserts from Sheet Foam and Slide in Front of Boot Tongue
We wanted to add some yellow to the bottom of the costume but were not willing to buy yellow boots.  Most homemade shoe covers that simulate boots look terrible and don’t stay on.  We came up with a solution I like very much.

In keeping with the tough look, Melanie will wear her black hiking boots and we just made a little yellow insert to stick between the laces and the tongue of the boot.  It worked out great!

CAPE – Cut from Spandex and Add Shoelace to Top for Attachment
We were trying to do this costume ultra cheap and originally were not going to have a cape but it turned out that we had just enough fabric left to make a decent one.  If it were a fully designed part of this costume I would have made it wider and longer but it works as is.  And besides, shorter is better for fighting crime.

First, we folded over a section of the cape at one end just large enough to get a shoelace easily through, then we pinned and sewed it.  So we had a small tube at one end of a large rectangle of fabric.

Next we ran a shoelace through this tube and test fit the cape.  The cape is attached by wrapping the ends of the shoelace over the front of the shoulders and then passing them through the armpit area and tying them together in the middle of the back.  This provides a very clean look for the cape with no need for a front clasp or knot under the throat.

We are both really pleased with how this costume turned out and how cheap it is.  Melanie already had a black shirt, black leggings and black boots.  The only things we had to buy for this costume were half a yard of “black swimwear lining” and a sheet of yellow Foamies.  Total retail price:  $6!  We had a coupon so it only cost us $3.50!