Growing up I liked to swim.  A lot.  I was on three swim teams throughout the year and a lifeguard during the summer.  So you can easily imagine that when I found out The International Swimming Hall of Fame is located right here in Florida that I would want to visit.  It has taken us several years to make the time for it, but an opportunity arose when we decided to make a trip south to Florida’s three national parks (Dry Tortugas, Everglades, and Biscayne).

As the name implies, ISHOF is the home of all things swimming.  It houses the largest collection of swimming memorabilia in the world – from the obvious items of historic value to an aquatic-themed art gallery to dioramas dedicated to the lives of swimming greats.  It is also home to all things related to diving, water polo, and synchronized swimming.

The setup of this place is weird and I think it’s this way for two reasons.  The first is the premium price of land in Fort Lauderdale.  Second is the multi-function purpose of the place.  It is used as an art museum, hall of fame, place for swim meets, and a set of large public pools.

Two things that struck me while we strolled around the museums:
1.  You know the yell, but did you know Tarzan could swim?  I knew Johnny Weissmuller was an incredible swimmer but I had no idea how many world records he set.  67!  Contrast that with Michael Phelps who has broken 39.
2.  There were not a lot of Olympic medals on display.  With a moment’s reflection, this makes complete sense.  These are not ancient awards.  Many of the athletes or their children are still alive today and I expect they want to keep the symbol of what they worked so hard to achieve.

I had a feeling there would be cheesy parts of this museum and I was not disappointed.  Even so, I was surprised at how much I enjoyed my time here.  Even Melanie, a person with no interest in this stuff, found it interesting and had a good time.

If you are in the area I recommend a visit.  Just don’t wait.  Rent has gotten so expensive on this nearly-oceanfront property that in about a year they expect to be relocating to California.

I’ll put the rest of my comments on the picture captions below. 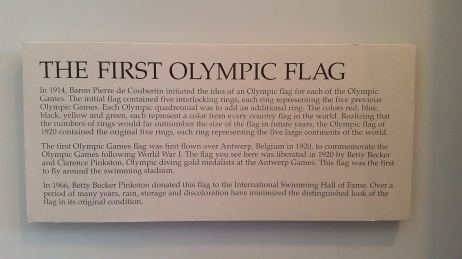 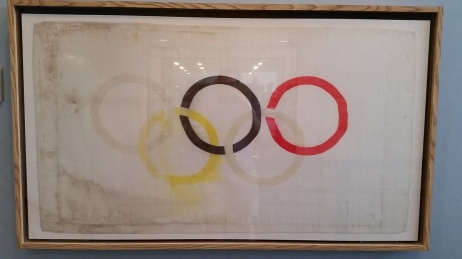 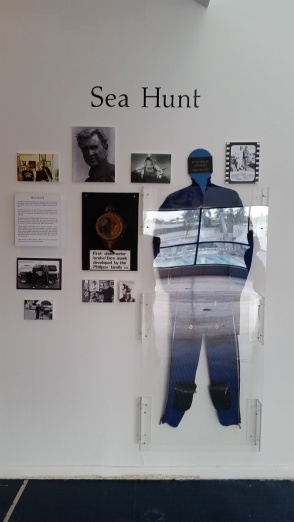 Sea Hunt Stuff and a reflection of some of the pools.

Sea Hunt and a reflection of me.

President Reagan was a life guard for many years and an excellent swimmer. 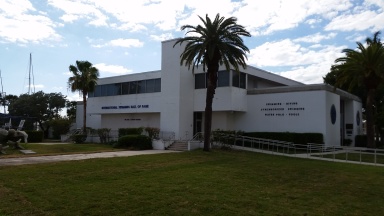 Once you get past the art museum and the pools you get to the hall of fame. 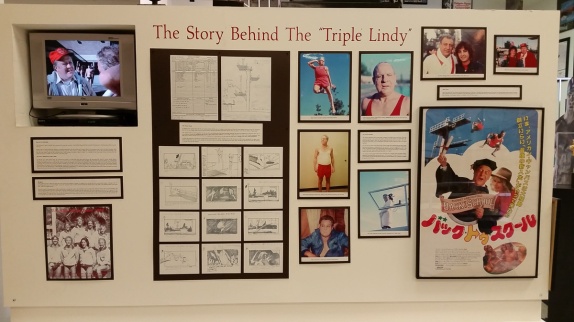 There were a wide variety of displays. Not all just swimming. They had stuff on how timing precision has evolved. Here we have detailed info on The Triple Lindy. 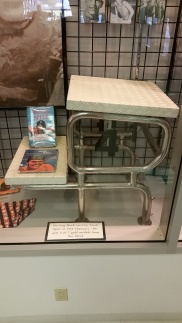 The starting block where Mark Spitz won most of his gold medals! 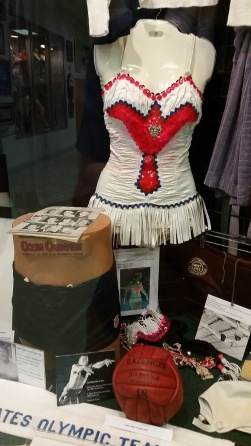 Did someone on this synchronized swimming team like Wonder Woman?

I was delighted that they had a display on modern suits. Besides golf and car racing, there are not many sports where equipment made such a drastic difference. The one on the left is the original developed in Italy. The middle is the Speedo suit that came out shortly thereafter that shook up the swimming world. Its surface is slicker in water than skin so times are automatically faster. The right shows one of the many variations that came out within a year. It only took about 2-3 years for the suits to be banned and many world records to be broken. 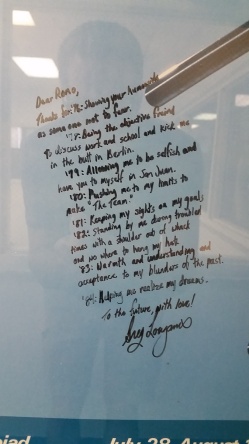 A Greg Louganis autograph on a poster.