A few weeks ago our church had an Egyptian marketplace as part of our VBS program.  One of my friends took the opportunity to set up an animal stall there, which led to me photographing two costumed friends holding a snake.  Please enjoy.

PS  It is kinda like photographing a kid.  Snakes don’t stay still and are determined to go where you don’t want them.

END_OF_DOCUMENT_TOKEN_TO_BE_REPLACED

I’m just getting around to processing some pictures I took when we visited a state park with some friends.

END_OF_DOCUMENT_TOKEN_TO_BE_REPLACED 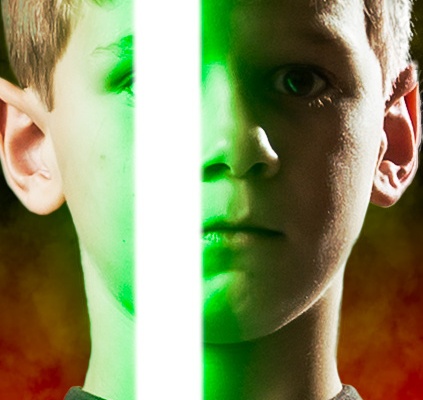 END_OF_DOCUMENT_TOKEN_TO_BE_REPLACED

Over Labor Day weekend we decided to shoot over to Live Oak, FL to tour a recently built treehouse for one of those construction shows on a TV channel we don’t get.  Calling ahead I found out that we didn’t need reservations for the tour even on a holiday weekend and the price was $8/person for a 15-30 minute tour.

END_OF_DOCUMENT_TOKEN_TO_BE_REPLACED

About a week and half ago we went to a local large cat sanctuary here in Jacksonville called Catty Shack for a nighttime feeding.  We’d been once before with a niece that is really into animals and knew it was a really neat experience.  That was a daytime visit.  As expected, the nighttime visit let us see a more active side to these impressive beasts.

END_OF_DOCUMENT_TOKEN_TO_BE_REPLACED 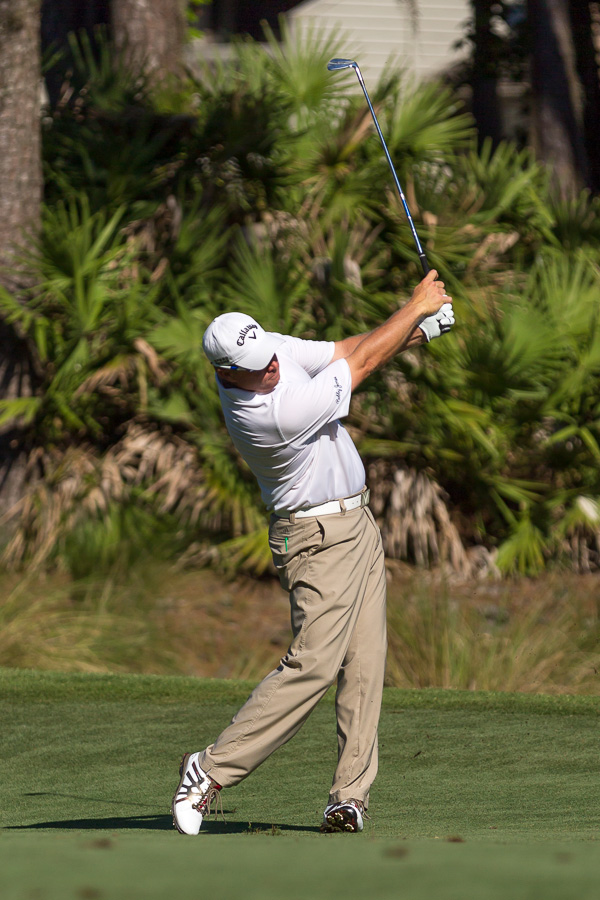 I was lucky enough to get a pass to a practice day at TPC this year.  I’ve been out there several times and it is always fun.  I’m not a golf fanatic but walking around the beautifully manicured environment there is so peaceful and pleasant.  If you ever get the opportunity, I recommend that you go.

END_OF_DOCUMENT_TOKEN_TO_BE_REPLACED

Last year when we hiked to Virgin Falls we decided it was just about the perfect time for hiking that part of the country – no bugs, no heat, no humidity, not too cold and good water flow in streams and waterfalls.  This year we decided to find another place to hike in the area at about the same time.  The choice was the Walls of Jericho near Scottsboro, Alabama.

The Walls of Jericho is a natural rock amphitheater where water sprays and cascades out of multiple holes and cracks in the surrounding 200’ tall gorge walls.  Apparently the water flow varies by season and the appearance of the place drastically changes accordingly.  It was a place I’d heard about as a kid but was off limits to the public.  In 2004, Alabama’s Forever Wild Land Trust purchased some of the large tract of land that spans Tennessee and Alabama and contains this scenic wonder, bringing it back into public use.

The description of the hike I’ve read other places is pretty accurate.  It has earned its strenuous rating because of its length, incline and trail conditions.  There is an elevation change of at least 1000 feet over the course of the Alabama trail.  If you are in pretty good shape, expect it to take you four hours to hike the six miles (roundtrip).  It isn’t as tough as Virgin Falls, but it will probably get you breathing hard from time to time.

Guides recommend allowing two hours for playing around at the Walls.  There is a lot of rock scrambling and some cave exploring you could do but if you are just planning to hike in, take a look and eat lunch, you won’t spend nearly this much time there.  Our total hiking time including a short lunch was just over four hours.

We had been warned that it would be muddy and slippery even if it hadn’t been raining recently.  This proved to be true for us and it hadn’t even rained much lately.  For this reason I highly recommend leaving a change of clothes and footwear at the car just in case you take a tumble or a slide somewhere on the trail.  Trekking poles are a huge plus.  Grippy waterproof boots are great too.  Does this mean you must have this equipment?  No way.  There were folks strolling along in their tennis shoes that did ok too.  It was definitely more enjoyable and safer for us with this equipment though.  Also, it would be smart to hike this trail with a partner.  We didn’t see anyone going it alone when we were there.

PRO TIP:  If you are traveling north on Highway 79 to get here, be aware that you will come to the horseback riding parking lot first.  We just assumed that the nice sign with the horse on it meant that it accommodated both hikers and horseback riders.  After just a few minutes on the trail, we realized that something was wrong, looked at our map again and realized what we had done.

Back in the car, we continued up Highway 79 for just a short distance and we found the correct parking area.  It had a handy sign too.  This one showed a hiker instead of a horse. 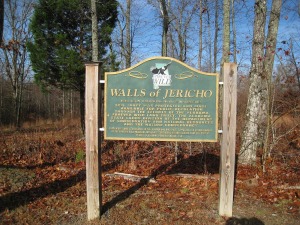 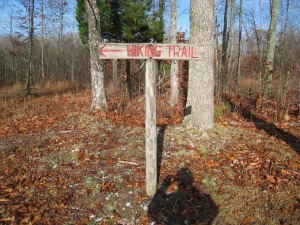 The trails, trailhead parking and camping areas are extremely well maintained with good signage.  They even have porta-potties at the parking lots.  Certainly the lap of luxury.

The trail starts off very flat with easily identifiable red blazes (not the yellow blazes of the horse trail).  Fairly quickly you begin your descent.  After two miles and many switchbacks you reach Hurricane Creek which you cross on a log footbridge.  Solid and fun. 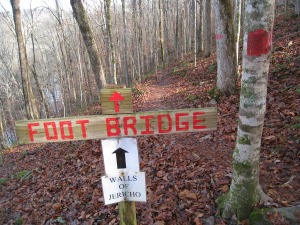 Somewhere along the way you will have passed a larger than average sinkhole on the right side of the trail (unverified GPS location 34.978626, -86.088583).  When we were hiking, there were three people that went in the cave at the bottom of this sinkhole.  They caught up to us later at the Walls and showed us pictures they had taken inside.  I was a little surprised at how extensive it was.  It would be a cool but muddy side trip to consider for a future hike.  It didn’t appear that they needed any spelunking equipment to enjoy it.

Once across Hurricane Creek, the trail levels out for a while in a much more open setting (no big trees towering over you) and you come to another log bridge but this time it is over Turkey Creek.  You’ll be following Turkey Creek all the way to the Walls now.

Just after you cross Turkey Creek (at about 2.5 miles) you will come to a large and well maintained campsite.  Just on the edge of the campsite is a graveyard called Clark Cemetery.  This would probably be a great place for ghost stories around the campfire. 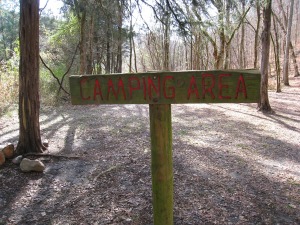 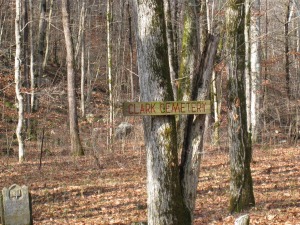 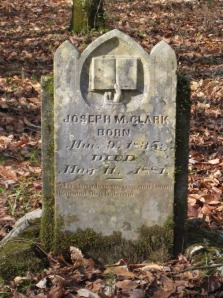 At the campground you could take a left and follow the South Rim Trail which, not surprisingly, would have you climb out of the gorge and follow the Walls along its southern rim.  We chose stay straight on the main trail that passes the graveyard and continues into the gorge.

Staying on the main trail, you’ll follow Turkey Creek along and up the hillside that opposes the one you just descended.  When we were there it was just a dry creek bed for a good while.  Counter-intuitively, this is where the muddy stuff really starts and there are more loose fist-sized rocks to deal with.  It is nothing treacherous but footing can be tricky and your pace will slow.

Near the end of the trail (about another half mile) you will cross Turkey Creek.  By this point for us, it was a nice-sized slow-moving stream that required getting wet to cross.  It was fun but the rocks growing algae were slick as ice.

Immediately on the other side you’ll summit a little hill where you have a nice view of a big pool with water cascading into it.

Just around the corner you will enter the amphitheater.  To your left will be a large cascade of water issuing out of a big hole in the side of the gorge.  You can scramble around and get right up to the opening, but be warned, it is super slick around here.  We saw another hiker fall hard here.  Melanie slipped and did a 270 around one of her poles (pretty spectacular to see) but stayed upright.  I wasn’t so lucky and did James Brown-worthy split landing on my knee and thigh.  Fortunately it was slowed down by my trekking poles and it didn’t really hurt at all.

At this point the caving hikers caught up with me and explained that this series of “steps” continued up to a dead end in the gorge and apparently there was a fairly difficult-to-find trail that lead back to the parking area from there.  They didn’t know exactly where it was and weren’t planning to go that far.  I turned around since it didn’t seem like there would be much to see that way and there was no way that Melanie was going to be able to climb up there without my help anyway because the first wall was so tall.

The hike to the Walls is pretty simple and easy.  You have to watch your footing for the last half mile, as noted above, but other than that it is a downhill walk.  Of course that means the return trip is mostly an uphill climb.  If you exercise regularly, it probably won’t be a big deal.  If you don’t, just plan to stop and catch your breath every now and then.  I think most adults could complete this hike and still be happy at the end.

Back at the car, I decided to check out a primitive camping area within a couple hundred yards of the parking lot.  Just like the other one, this one is nice and clean.  It has a decent view of the valley and is within walking distance of the parking lot porta-potty. 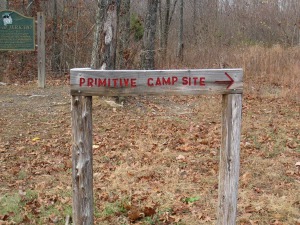 If you are within driving distance of the Walls of Jericho it is a worthwhile hike.  You don’t have to dedicate an entire day to it so you can take your time or start later in the morning.  There are other things to do in the area (I’m interested in finding out more about the Bear Den Point Trail).  You could even break it up into a two day affair if you like to camp or backpack, which would be great for younger hikers.  It isn’t the greatest natural wonder I’ve ever seen but I’m certainly glad that I got to visit.

Location: Near Scottsboro, AL (Just north of Hytop) on Highway 79.  Google Maps has a surprisingly accurate push pin location for it if you enter “Walls of Jericho, Estillfork, Jackson, Alabama 35745” (see image below).

Time:  4-6 hours depending on speed and time spent exploring

Rating:  Strenuous – 1000’ elevation change – downhill in and uphill out

Notes:  Trail is muddy and slippery in parts.  Recommend a partner and trekking poles.  Requires a shallow stream crossing.  Recommend waterproof boots and/or change of socks and shoes.